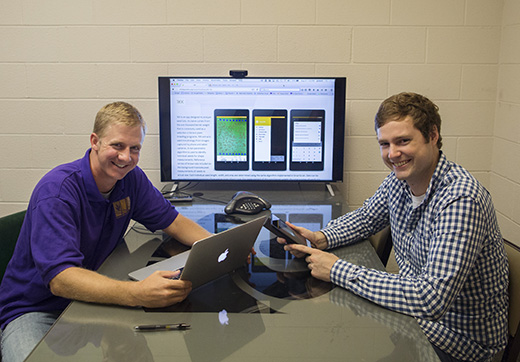 MANHATTAN — Global populations are booming, food demand is skyrocketing and climate change is threatening food security — meanwhile, access to mobile technology is becoming commonplace. The ground is fertile to harness the power of this global mobile network to create and implement tools to accelerate the development of food crops that can withstand the coming challenges of the 21st century.

With $1.5 million in funding from the National Science Foundation Basic Research to Enable Agriculture Development, or BREAD, Program, the team will work to develop mobile phone and tablet applications that enable breeders and scientists around the world to accelerate development of improved plant varieties. The BREAD Program is a partnership between the NSF and the Bill and Melinda Gates Foundation designed to take ideas that are at the forefront of research and put them into a context that can help smallholder farmers in the developing world.

Through this BREAD project, the team plans to develop new mobile apps to collect phenotypic plant data, such as disease resistance, plant height or seed size in the field, much more efficiently and at a much lower cost than is currently possible.

"This is the next step for us. After seeing the rapid uptake of Field Book, an app for collecting field research notes, it confirmed for us the incredible potential mobile applications have in the world of agriculture, and in particular for plant breeding," said Jesse Poland, assistant professor of plant pathology at Kansas State University and principle investigator on the project. "For plant breeders and scientists, the collection of phenotypic data is a huge bottleneck because the usual approach of pencil and paper is laborious and time prohibitive; this part of research has basically been the same for the last 100 years. New tools that can assist breeders to rapidly measure these plant traits would help lead to better varieties for farmers."

Poland said that we take a lot of things for granted in the U.S. — things like the availability of internet and electricity.

The team is focusing on developing mobile technology, applications and systems that would work under this paradigm: where a group needs to be functioning every day during the field season, the budget is very limited, and power and internet access might not be available.

"The value of developing apps for consumer smartphones and tablets is that the cost to implement them into breeding programs is so low, making them accessible to researchers and scientists in the developing world," said Trevor Rife, graduate research assistant in plant pathology at Kansas State University who has led development of Field Book.

According to Rife, breeders are accustomed to spending thousands of dollars on software and hardware, whereas the research team will be making its tools freely available. Once the global network of breeders and farmers is established and due to the nature of mobile applications, the apps can be re-released over time with new features, and completely new apps can be designed and deployed to the entire breeding community with ease.

"Rapidly producing new climate-resilient, high-yielding and nutritious plant varieties is critical to improving food security, income and economic welfare," Poland said. "To do this, we need to equip breeders with the tools to tackle this big task on a global scale. It is exciting to have this BREAD project to focus on that objective."

Scientists at the Borlaug Institute for South Asia in Jabalpur, India, use the Field Book app to record data in a wheat breeding trial.