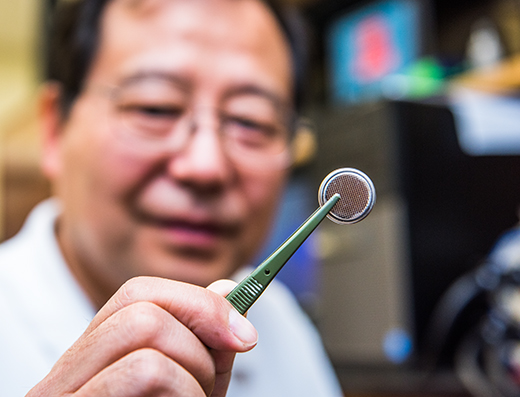 MANHATTAN — Inventors at Kansas State University and Catalyst Power Technologies Inc. are paving the way for the future with energy-efficient batteries for sensors, portable devices and electric cars.

The inventors are adjusting structure, composition and other factors to store more energy per gram, thereby reducing the battery's weight, making it run longer and improving the power output.

The invention has been featured in about 30 presentations and publications, and was on the cover of the Journal of Materials Chemistry A, a scientific journal published by the Royal Society of Chemistry. The patent was issued to the Kansas State University Research Foundation, a nonprofit corporation responsible for managing technology transfer activities at the university.

"One key component of the electric car is the battery, so we ask, 'After it is charged, how many miles can you drive?'" Li said. "We also examine how long it takes to charge the battery after it's used."

The price point is pivotal. For example, 70 percent of the cost of Tesla's newest version, the Model 3, goes to the battery, according to Li. Unveiled July 29, the new model is scheduled to hit the market in late 2017 with a projected cost of $35,000.

"To lower the cost is one thing, but just as important is if you can create a better battery with a similar cost," Li said. "If the batteries are priced similarly, but this battery can run longer and provide more energy, it's equivalent to the advantage of paying less."

In addition to all-electric cars, the batteries could be used in hybrid vehicles, portable electronics, power tools and military and outer space applications. National Science Foundation, NASA and the state of Kansas have provided funding for the research. Catalyst Power Technologies Inc. is pushing this technology to the market.

"After 28 years working with these nanomaterials, it is highly rewarding to find an application with such influence on the future of transportation and electronics," Li said. "I am excited to see our work in the lab transfer to industry products."

Kansas State University's chemistry department is part of the College of Arts & Sciences.

"After 28 years working with these nanomaterials, it is highly rewarding to find an application with such influence on the future of transportation and electronics. I am excited to see our work in the lab transfer to industry products."