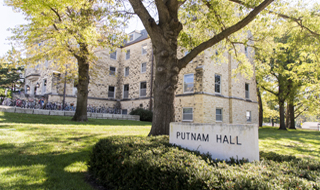 Putnam Hall is a coed residence hall for up to 245 students on five floors.

This residence hall was built in 1951 for $842,000. It was originally known as Southeast Hall before receiving its current name in honor of Dr. Irene Putnam in 1961. Dr. Putnam's noteworthy contributions to K-State include the Putnam Scholarship Program as a memorial to her late husband, Harry J. Putnam.