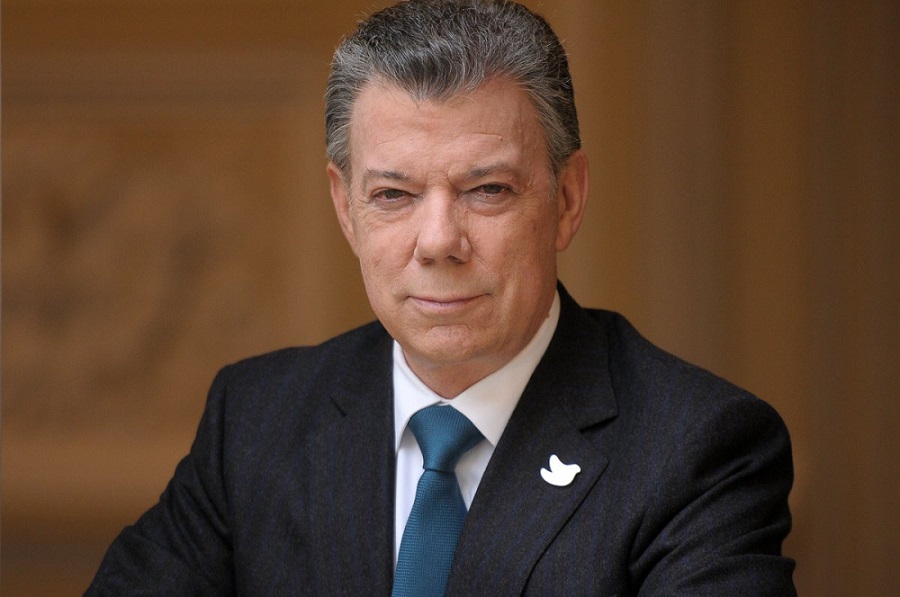 A former two-term president of the South American nation of Colombia and winner of the Nobel Peace Prize presented the first Landon Lecture of the spring 2020 semester at Kansas State University. Juan Manuel Santos spoke at 10:00 a.m. Tuesday, Feb. 4, 2020, in Forum Hall at the K-State Student Union.  The title of President Santos’ lecture was “From hawk to dove."

During his tenure as president from 2010-2018, Santos is credited with ushering in a new era of prosperity, peace, equity and education throughout Colombia. His tenacity and determination to achieve peace and reconciliation in his country earned Santos the 2016 Nobel Peace Prize, which recognized his efforts to bring the country's more than 50-year-long civil war to an end. Santos has been twice-named to TIME’s "100 Most Influential People" and received the World Economic Forum’s Global Statesman Award.

President Santos reflected on his transition from hawk to dove. He went from a war maker to a pacifier, a shift difficult to understand but necessary. During his lecture he expanded on his philosophy, “Sometimes you need to wage war to make peace. I was a hawk because circumstances required it, but I always knew – as I said to the soldiers of our army – that the real victory, the only victory, the ultimate victory… was peace.”

"Kansas State University's Landon Lecture series is known for bringing top global leaders to campus," said Linda Cook, chair of the Landon Lecture Series and K-State's chief of staff and director of community relations. "As one of the most recognized and influential leaders in the world today, we look forward to the insights and analysis President Santos will share with students, faculty, staff and the public."

Santos' lecture was free and members of the university community and public were encouraged to attend.

Santos is the author of several books, including "The Third Way," which he wrote with former British Prime Minister Tony Blair, and "Jaque al Terror" or "Checkmate to Terror," in which he describes how he successfully fought the Revolutionary Armed Forces of Colombia, known as the FARC.

Before becoming president of Colombia, Santos served in several capacities of the Colombian government, including as foreign trade minister, finance and public credit minister, and national defense minister.