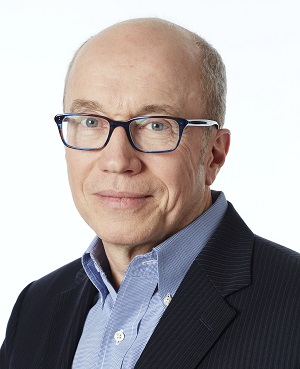 Alan Murray, the CEO of Fortune, the global media company featuring the business magazine Fortune, delivered a Landon Lecture at Kansas State University at 10:30 a.m. Friday, Sept. 27, in McCain Auditorium. The title of Murray's lecture was "The Future of Facts: Searching for Truth in the 21st Century."

"Alan Murray has a distinguished background in journalism and public opinion, leading and transforming several of the nation's most distinguished media companies," said Linda Cook, chair of the Landon Lecture Series and the university's chief of staff and director of community relations. “Mr. Murray is committed to quality journalism, innovation and culture change. His Landon Lecture topic is extremely relevant with today’s rapid movement of information from an ever-increasing number of communications platforms.”

As Fortune CEO, Murray oversees the independent media company's global operations in print, digital and live events. He previously served as editor-in-chief of Fortune magazine, founded in 1929, and was responsible for integrating the print and digital teams, establishing new franchises and platforms, and increasing Fortune.com’s traffic. Today, Fortune is one of the world's leading business media brands and comprises a multinational monthly magazine, daily website and conference series. Fortune also is known for its iconic business lists, including the Fortune 500; the Global 500, the listing of the world's top companies; as well as lists for the most powerful women, best companies to work for, best world leaders and more.

Before joining Fortune, Murray was chief content officer of Time Inc. where he oversaw all editorial operations, he was president of the Pew Research Center, and hosted an eponymous show on CNBC. He spent more than two decades at the Wall Street Journal where his experience included overseeing digital operations, conferences, video and the newspaper's Washington, D.C., bureau.

The author of four books, Murray also is a member of the Gridiron Club, the New York Economics Club and the Council on Foreign Relations.

Murray received a bachelor's degree in English literature at the University of North Carolina, a master's degree in economics from the London School of Economics and completed the Stanford Executive Program in 2005.

One of the most prestigious lecture series offered at a U.S. college or university, the Alfred M. Landon Lecture Series was instituted in 1966 by former Kansas State University President James A. McCain. The series is a tribute to Alfred M. Landon, who served as governor of Kansas from 1933-1937 and delivered the first lecture in the series. Murray will be the 191st speaker in the series.