The Upper Seaton Hall Green Roof is a small, semi-intensive green roof atop the third-floor breezeway on Seaton Hall's west wing. It was designed and installed by K-State faculty and students with in-kind support from green roof suppliers. The primary purpose of this project was to assess the long-term viability of native plants on a full-sun green roof in Manhattan, Kansas, without supplemental irrigation after a two- to four-year establishment period. The research plan consisted of monitoring plant growth and vigor along with soil moisture and microclimatic conditions.

The roof uses American Hydrotech semi-intensive grow-media with soil depths varying from 3-4 inches near the edges to 5-7 inches in the middle of the roof. Plants initially included in the project:

Native grass and wildflower seed from Marlatt Park, The Meadow — near the Beach Museum of Art — and other managed prairies in Manhattan have been added occasionally on the Seaton Upper Green Roof. This supplements seed created by plants growing on the roof that falls on or is intentionally buried in the substrate. 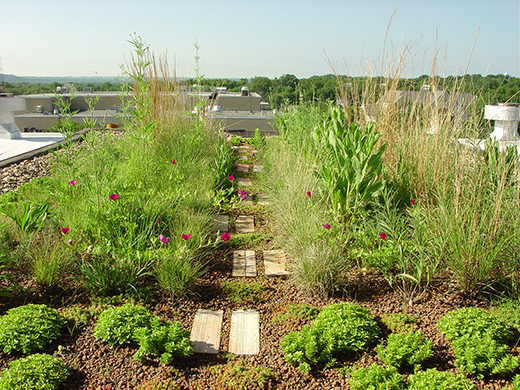 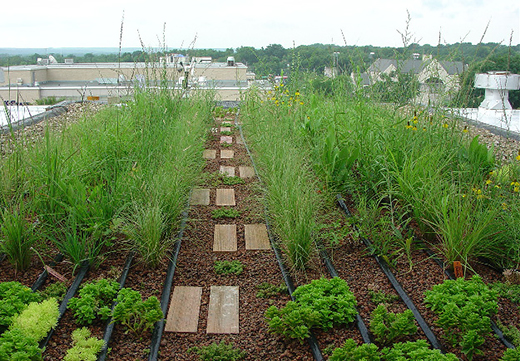 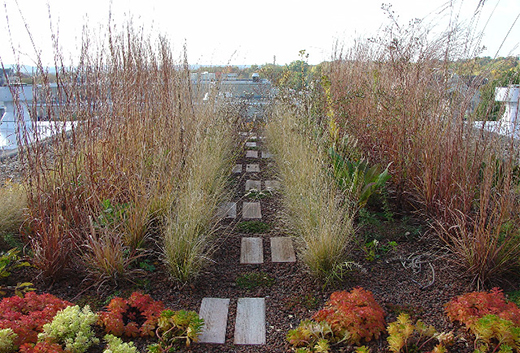 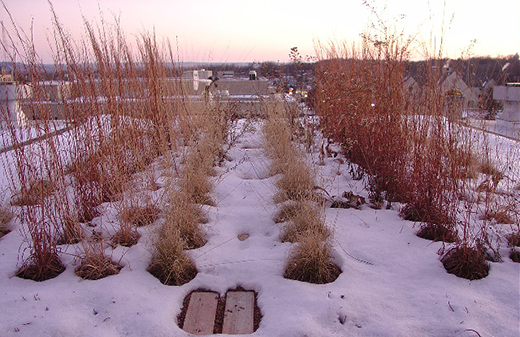 The intent of this project was to see how green roof vegetation responded to drought conditions on a roof receiving full-sun exposure and limited irrigation.

Soil moisture sensors, a rain gauge, temperature sensors, and other monitoring equipment were installed on May 19, 2009. Subsurface temperatures on the Upper Seaton Hall Green Roof can exceed 49 C, or 120 F, and soil moisture levels can be very low when not irrigated. Vegetation was initially irrigated through 2010 for plant establishment. In 2011, this was reduced to only when vegetation was visibly stressed up until 2012 when irrigation was discontinued. At that time, the roof had nearly full coverage by native grasses and forbs, or wildflowers. More than 420 woody plants — including 320 elm seedlings — were pulled from the roof in 2012.

Vegetation on the Seaton Hall Upper Green Roof began to decline or die off once supplemental irrigation was eliminated in mid-August 2012, and most species of native forbs died off. Only four species of wildflowers remained in 2017: purple prairie clover, upright prairie coneflower, which is also called Mexican hat, purple poppy mallow and common spiderwort. Three native grasses are still present: blue grama and sideoats grama are the most robust, with little bluestem also observed. In 2013, due to dry conditions, woody plants died out during dry periods and did not need to be manually removed.

The major finding of this demonstration project was that during the six years after establishment, brownout and dieback of native species primarily occurred during prolonged dry periods without supplemental irrigation. Supplemental irrigation is important if relatively full coverage is to be retained on a green roof in the Flint Hills Ecoregion with full-sun exposure. However, irrigation once a week during dry periods would likely be sufficient on this roof for a number of native grasses and wildflowers.

The roof was envisioned and installed by K-State students and faculty with the assistance of other green roof professionals. This relatively small green roof is situated above two offices and was retrofitted onto the existing Seaton Hall. It is surrounded by buildings on three sides and has, a west-facing exposure, making it much more sheltered than the Seaton Hall Upper Green Roof. This green roof project demonstrates two different styles of green roof construction, both modules and integrated substrates, as well as how stormwater can be captured in a cistern and used to maintain green roof vegetation.

The Seaton Hall Lower Green Roof is an extensive to semi-intensive green roof system with integrated substrate surrounded by 1-by-2 foot modular trays. The LiveRoof™ modular trays vary from 2.5 to 6 inches deep and came from the supplier with Sedums already planted in the trays. The integrated substrate is American Hydrotech™ placed 5 inches deep. Live native plants were installed in the integrated substrate. A few native plants were also planted in the modular trays. This green roof does not use an automated irrigation system; instead, it is watered by hand using stormwater captured from a nearby rooftop and stored in a 300-gallon cistern until it is pumped out via a hose connected to a submersible electric pump. 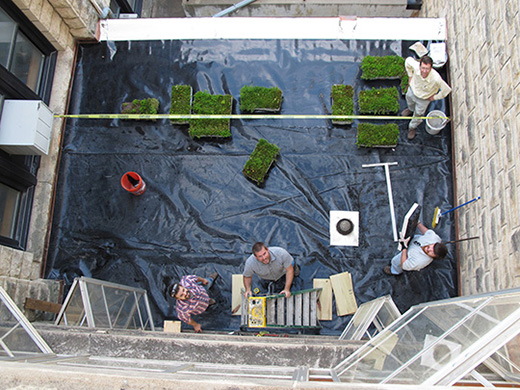 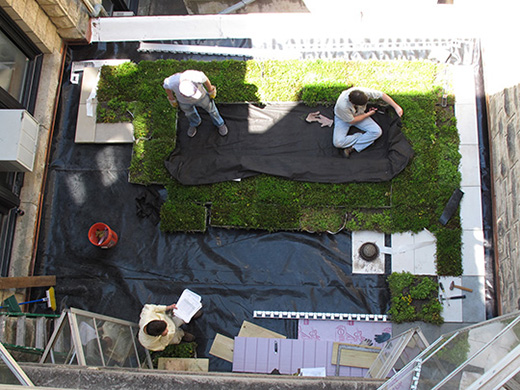 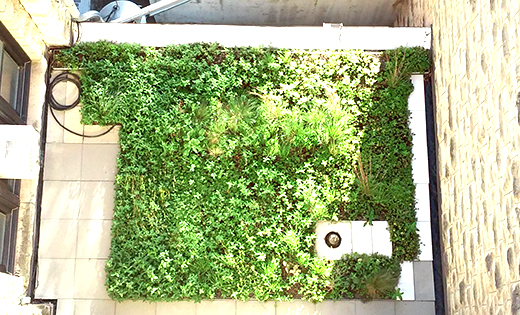 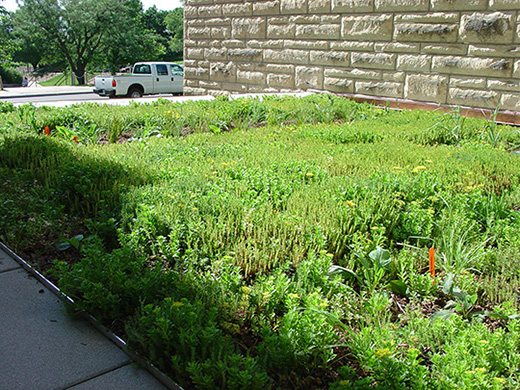 This project has involved tracking plant survival and maintenance requirements. Since the Lower Green Roof was implemented in May 2012, vegetation has remained relatively stable in terms of overall coverage. The native plants growing in both the LiveRoof™ modules and the integrated substrate quickly established, and in several places outcompeted Sedums in the trays. For example, American germander, which began to spread rapidly in 2014 and 2015, was perceived as too aggressive and was weeded out or clipped back in 2015. Initially, just a few hundred stems of the plant were cut back, but by 2017, more than 1,700 stems of the American germander were cut back. Roundleaf ragwort died out on the sunniest portion of the roof but has been dominant in the shady portion of the green roof, suggesting that microclimatic conditions can significantly impact plant survival.

This green roof was susceptible to invasive species, such as prostrate spurge and woodies, making regular weeding required. Between 2015 and 2017, an average of more than 450 woody plants such as elm, mulberry, Eastern red cedar, and oak were pulled each year.