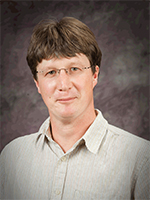 Ph.D. 2003, University of Groningen, The Netherlands.

Biochemistry and Cell Biology; Regulation of Protein Degradation by the Proteasome.

The ability to degrade specific proteins is essential for many cellular events, such as cell cycle progression, DNA repair, and many signal transduction pathways. In eukaryotes a large group of proteins (in humans, e.g. more than 650 proteins) is involved in selecting proteins destined for degradation by marking them with an ubiquitin tag. Most of these ubiquitinated proteins are degraded by a complex protease, the proteasome. Failures in the Ubiquitin-Proteasome System (UPS) have been associated with neurodegenerative diseases, cancers and other human diseases.

The proteasome consists of two sub-complexes, the core particle (CP) and the regulatory particle (RP) and has several factors that can associate with it. The 28 subunits of the CP form a cylindrical shaped structure with proteolytic sites located on the inner surface. The CP can bind RP at either side of the cylinder. The 19 subunits of the RP are involved in recognizing, unfolding and threading of ubiquitinated substrates into the CP chamber.

The research in my lab is driven by a desire to understand the proteasome. How does this molecular machine work? What role do the different subunits play? How do the 66 proteins that form the proteasome come together and form one functional unit? Previously I identified several proteins that work as chaperones, assisting in the assembly of the proteasome. One project in my lab continues to study how the proteasome assembles and in what way the chaperones assist in this process. For this and other studies in the lab we use the yeast Saccharomyces Cerevisiae (most proteasome subunits as well as many mechanistic details are conserved between yeast and humans), as well as mammalian tissue culture. The studies include biochemical and cell biological methods (including fluorescent imaging techniques) as well as yeast genetics.

Wani, P.S., A. Suppahia, X. Capalla, A. Ondracek, and J. Roelofs. 2016. Phosphorylation of the C-terminal tail of proteasome subunit α7 is required for binding of the proteasome quality control factor Ecm29. Scientific Reports 6:27873.

Lee, S.Y., A. De la Mota-Peynado,and J. Roelofs. 2011. Loss of Rpt5 protein interactions with the core particle and Nas2 protein causes the formation of faulty proteasomes that are inhibited by Ecm29 protein. Journal of Biological Chemistry 286(42):36641-51.