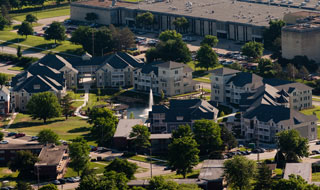 The original apartments date back to 1957, but six of those buildings were renovated in phase one of the Jardine redevelopment project. The fourteen new buildings built in phase one offer more diverse living options for students. Recent additions include the Jardine Marketplace, which contains CornerStone Coffee and a bakery; a restaurant and a sports lounge will eventually be added. While the apartments were originally intended to accommodate the great influx of students at the end of World War II, they have grown and changed with the needs of the campus.