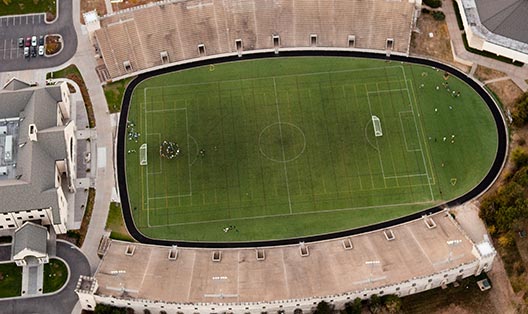 Commonly called Memorial Stadium, this field is used for K-State marching band practice, club soccer and rugby. The interior of the East Stadium and West Stadium stands, were enclosed in 1928 and 1938. The Purple Masque Theater is located in West Stadium.

East Stadium and West Stadium seating combine to make what is commonly known as Memorial Stadium. The structure was built in three stages throughout the 1920s for a total cost of $125,000. It commemorates K-State students and alumni who sacrificed their lives in World War I. It hosted K-State football and track events until those sports moved into the current Bill Snyder Family Stadium in 1967. FieldTurf replaced the grass field, and a rubberized surface replaced the cinder track in 2002. Campus legend says a ghost named Nick haunts the Purple Masque Theatre, which is housed inside the enclosed stands of East Stadium. The ghost is reportedly the spirit of a K-State football player who died in the 1950s, and has allegedly made noises, shuffled boxes and chairs and even discharged a fire extinguisher.