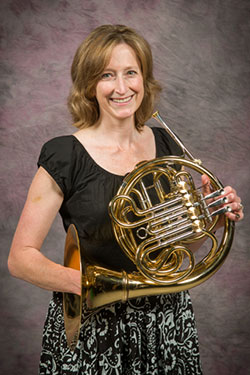 Jacqueline Fassler-Kerstetter teaches horn, music theory, and brass techniques. She is a member of the K-State Faculty Brass Quintet and the Konza Wind Quintet.

Having been part of the Kansas Arts roster, Jacqueline has participated in residencies and performed for audiences of all ages throughout the state of Kansas.

She has performed as horn soloist with the K-State orchestra, bands, and clarinet choir. In the spring of 2006, Jacqueline was featured as a soloist on the K-State Symphony Band’s South Pacific tour. In the summer of 2013, she performed with her husband Tod Kerstetter at the International Clarinet Association’s “ClarinetFest” in Assisi, Italy.

Students in Jacqueline’s horn studio have excelled. In the recent years, her horn students have won the K-State Symphony Orchestra’s Concerto Competition. Matthew Wilson performed the first movement of the Glière Concerto (2010), and John Allred performed the first movement of the Gordon Jacob Concerto (2011). Alumnus John Allred was invited to perform a solo with the San Francisco Conservatory Symphony Orchestra for an Armed Services benefit concert in April 2015.