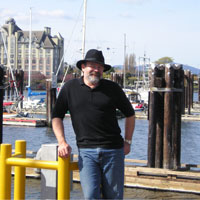 Professor Jim Sherow received his Ph.D. from the University of Colorado in 1987, and that fall his dissertation, "Discord in the Valley of Content," won the Westerners International-Phi Alpha Theta Award for the best dissertation in Western history. He taught as an assistant professor at Southwest Texas State University before arriving at KSU in the fall of 1992. He became an associate professor in 1993, and a full professor in 2007.

Professor Sherow is the author of six books: The Chisholm Trail: Joseph McCoy's Great Gamble (2018), Railroad Empire Across the Heartland: Rephotographing Alexander Gardner's Westward Journey (2014), Images of America: Manhattan (2013), The Grasslands of the United States: An Environmental History (2007), A Sense of the American West: An Anthology of Environmental History (1998), and Watering the Valley: Development along the High Plains Arkansas River, 1870-1950 (1990). He has also published four book chapters and eighteen refereed articles.

His teaching and research interests are environmental history, Kansas history, North American Indian history, and the history of the American West.

Professor Sherow's 1991 summer-teacher institute in environmental history for public school teachers was the first such program underwritten by the National Endowment for the Humanities, and NEH awarded funding for a second summer-teacher institute for the summer 1995. He has received awards for his teaching and scholarly research. He is actively involved in public history and historic preservation, and has served for ten years as the governor-appointed Kansas historian on the Kansas Historic Sites Board of Review. Jim was elected to the city commission of Manhattan in 2007 for a two-year term, re-elected in 2009 for a four-year term, and served as mayor from 2011-2012.