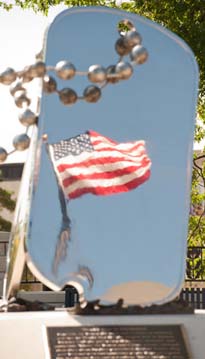 The World War II Memorial is located in the center of Goldstein Circle in front of McCain Auditorium and honors the sacrifice and service of students and faculty during World War II. It was dedicated on Memorial Day in 2011.

The memorial consists of a large pair of dog tags on a pentagonal-shaped base, which is surrounded by three bronze plaques that represent the military services by air, by land and by seas.

Honoring Those Who Served in World War II

When Kansas State University students and others look at a new World War II memorial on campus, they'll be reflecting on more than soldiers' sacrifices. They'll also be faced with self-reflection.

That's because the sculpture, which will be dedicated on Memorial Day, has a polished surface that will reflect the viewers' faces back to them. Art DeGroat, K-State's director of military affairs, said that he hoped that by seeing their faces in the piece students would put themselves in the place of fellow K-Staters who were called to service more than 60 years ago.

That's by design, according to Fred Cholick, former president and chief executive officer of the Kansas State University Foundation.

"We felt that with a traditional memorial students would walk past and it wouldn't get their attention," he said. "This will draw students over to think about the impact World War II had on their campus."

"Tags of Honor" are installed at the World War II Memorial Plaza at K-State, near Mid-Campus Drive and Vattier Street. The installation includes "By Land; By Sea; By Air," a series of bronze plaques that surround the sculpture. The pieces are by Daniel W. Hunt, a K-State associate professor of art. 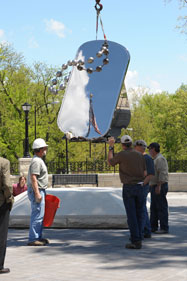 Lorne Render, former director of K-State's Beach Museum of Art, pushed for more than a monument but rather an art piece, DeGroat said. The sculpture, "Tags of Honor," was designed by Tim D. Chapman. It features a pair of military dog tags leaning on one another and connected by a beaded chain. So that the sculpture would be historically accurate, the artist used as a model tags borrowed from K-State alumnus Dr. John Lindholm, Manhattan, a 1949 graduate.

DeGroat said a defining feature of the tags is a notch in the corner. He said this was to accommodate a soldier's tooth when the dog tags were placed in his mouth for a battlefield burial. The tags would help identify the remains when the body was later disinterred and reburied elsewhere.

"That notch is a significant part of World War II dog tags and says a lot about soldiers' sacrifice," DeGroat said.

With the many ways that K-State reaches soldiers and military families through education, programs and research, the memorial serves as a symbol of the military-inclusive culture at K-State, DeGroat said. Unlike many war monuments, this one is not only for the dead; rather it is for all World War II veterans, DeGroat said.

"The memorial is not just for the fallen but for all who served," he said. "Many alums were pulled out of school for the war, and some of them came back. This memorial is a tribute to all of them."